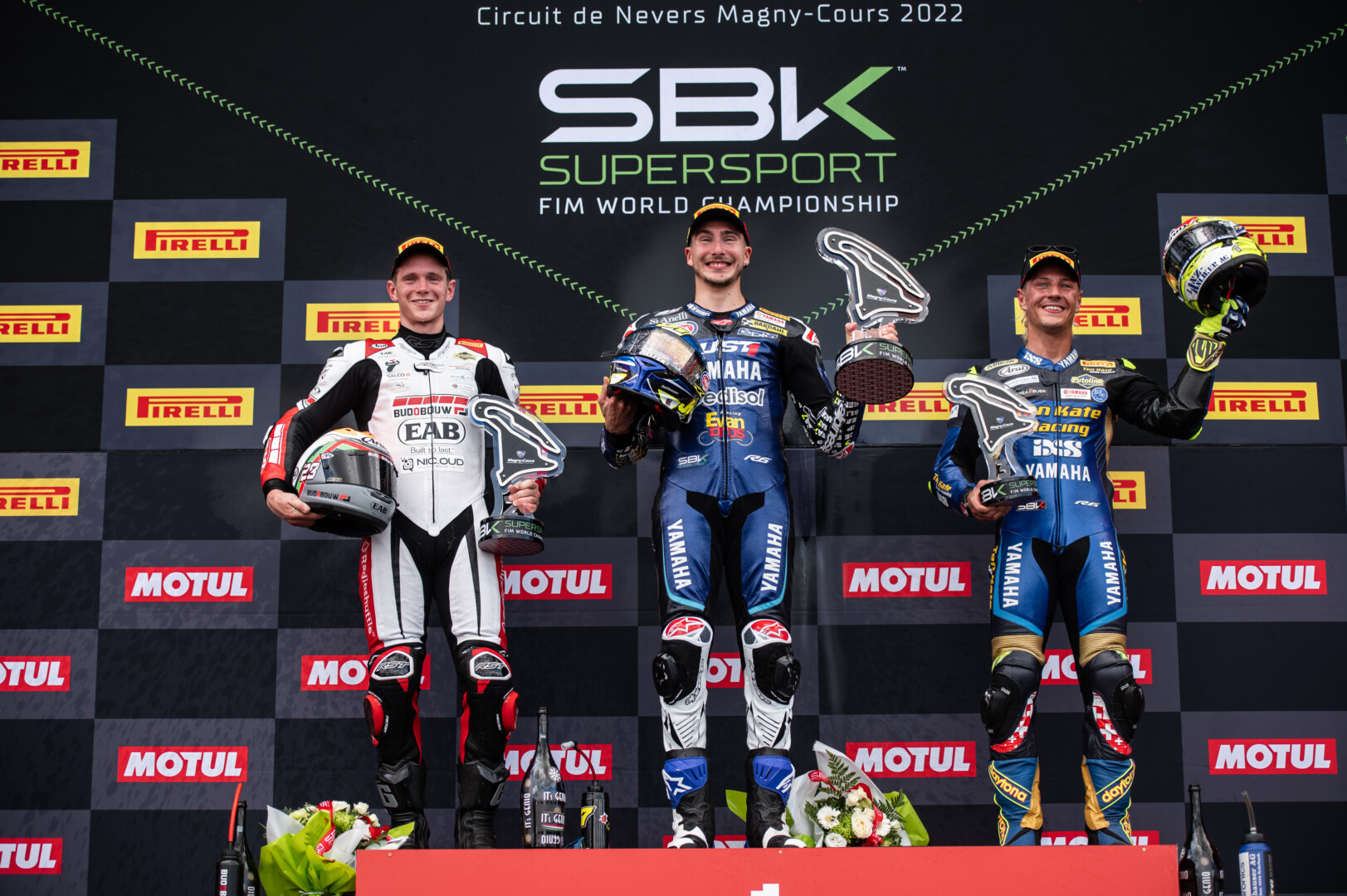 A very strong weekend for the EAB Racing Team and Glenn van Straalen in Magny Cours, France. After a six-week summer break, it was time to race again in the FIM Supersport World Championship from September 9-11. The EAB Racing Team squad even as leaves France with full motivation and confidence. We finished a good weekend in Magny Cours with a second place and a DNF.

The race weekend started off with mixed conditions but ended with lovely post-summer weather. The free practices were semi wet/dry. Not the optimal conditions to find a good setting on the bike. The opening day started a bit difficult. The Yamaha-rider rode a few laps and was forced to sit out a part of the second practice with braking problems. As a result, Glenn missed important riding time and information on Friday.

During Saturday morning’s Superpole Glenn showed once again that he is really strong. He immediately showed good speed and we also saw a strong racing rhythm by the 21-year-old Dutchman. This resulted in sixth place for the two races to be run later in the weekend.

The first race of the weekend started at 15:15 on Saturday afternoon. The conditions were good, it was dry and the sun was high in the sky. Glenn had a good opening and in the first laps he put in a nice overtake on Dominique Aegerter and Lorenzo Baldassarri for a podium position. Halfway through the race, the EAB Racing Team rider along with Baldassarri managed to break away from the rest of the field. On the thirteenth lap the race was interrupted by a red flag. With this we were over second third of the race distance. This meant a great second place for Glenn.

Everything that went well in the first race but turned around in the second race on Sunday. Glenn didn’t get a good start and lost a few places. It was a chaotic opening lap, which also affected the EAB Racing Team rider, who passed the finish line tenth on the first lap. It was difficult to work his way forward. Unfortunately, the race ended early due to a crash in the adelaide hairpin by trying to overtake. It is a shame to end the weekend like this.

Glenn: “Overall it was a good weekend in Magny Cours. The first day we saw mixed weather conditions and we had some problems with the braking, so we missed usable riding time. The Superpole on Saturday morning was good, I was able to set fast times and that was good for a sixth place on the grid. The first race was fantastic of course. To achieve a podium immediately after the summer break, after the last time in Assen is just great. Race two was unfortunately different. I had a bad start and unfortunately didn’t have the feeling I had during race one. While working my way forward, I crashed which resulted in a DNF. It is a shame to end the weekend like this. Furthermore, we showed ourselves good this weekend and that gives us confidence for Barcelona.”

In two weeks, the FIM Supersport World Championship will be back in action. From 23 to 25 September Glenn and the EAB Racing Team will compete at the Circuit de Barcelona-Catalunya circuit.